Unassembled plastic model kit in 1/72 scale of a Ryan Navion light utility aircraft designed and developed for civilian market after WWII but with a long life in military service.

Kit includes PE (photo etched) and resin detail parts, and two clear plastic injected canopies. This kit with same code number has been released twice by Valom at least with different decal sheet. The above box art belongs to the first issue (2014) while the second one added the Korean War sub-title. We are not sure what’s the content of the first edition either decals markings. The second edition contains two markings, one unconfirmed and one for Korean War, both belonging to U.S. Army branch.

See on Ebay »
Shipping to: US
From: DE
Seller: ssr-modellbau
100.0% Positive votes

See on Ebay »
Shipping to: US
From: DE
Seller: raduir
99.0% Positive votes 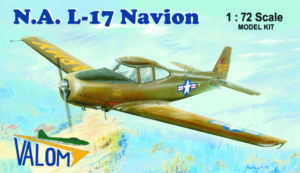 See on Ebay »
Shipping to: US
From: US
Seller: decal_supply_corps
99.8% Positive votes

See on Ebay »
Shipping to: US
From: GB
Seller: davecoley
99.9% Positive votes