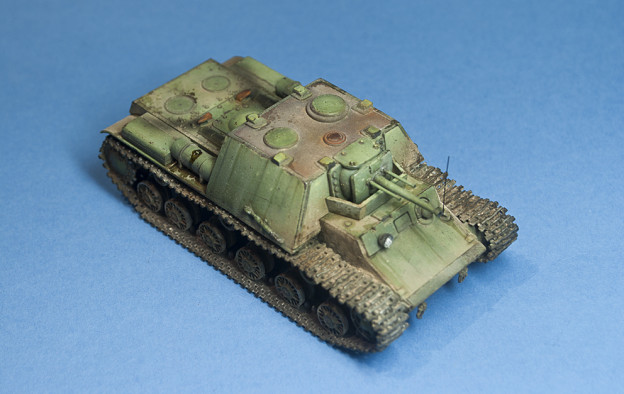 A bit of history :

KV -7 ( Object 227 ) – Experimental Soviet heavy self-propelled gun ( SPG ) of the period of the Great Patriotic War.This war machine was developed design office Chelyabinsk Kirov Plant ( CHKZ ) in November 1941 under the leadership of Joseph Yakovlevich Kotin , Chief Designer of Russian heavy tanks and self-propelled guns of the time. In the creation of the KV- 7 also participated LE Sychev ( chief engineer ) , GN Moskvin , weapons designer of the Ural Heavy Machinery Plant ( UZTM ) KN Ilyin and GS Efimov . The car was first built in the Soviet heavy self-propelled guns during World War II. Although adopted the Workers ‘ and Peasants’ Red Army KV-7 has not been taken and the standard was not made, resulting in its development experience has allowed later in a very short time to create a serial SPG in this class.

This set consists of quite old kit PST and additional details from the company Zebrano. Of the additions Zebrano has 3 metal barrel and resin turret.

Set at first glance looks poor, but the assembly does not cause problems. Detailing is not bad, but almost all of the small details come together with one large piece. Casting quality is not bad, but the tracks are made fairly primitive, but better than the Pegasus)).In this work, there is no historical authenticity, because after the unsuccessful tests this tank was dismantled for scrap. But in my work, I gave him a second life to some alternative history. The upper armor plate I had left in the primer color, as is sometimes done in Panzerwaffe 46. Model painted as usual with artistic acrylic Polycolor, MIG pigments, and oils. 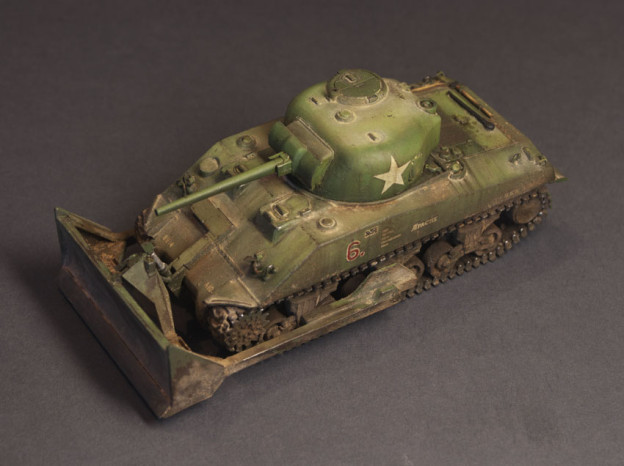 A bit of history:

The destruction generated by military operations, and various obstacles deployed by the Axis forces to slow down the progress of the Allied armour led to the need for a dozer tank. The US Army needed an armoured dozer able to clear roads, fill in ditches and bomb craters, clear rubble and move destroyed vehicles blocking roadways. The allied armies used several types of bulldozer, however, these machines were un-armoured and could be used only in zones far away from the frontline.

This is one of my first works in the scale of 72th, after 35th scale of the model I have tried to carry out a full list of all the weathering techniques.

Green came out a little more green than allies, but I did not repaint it all over again. Dozer blade I dyed in three stages.The first struck a subterranean dark red (the color of burnished steel), then the method of hairspray struck green, a little flush green, repeated the same trick with Metallic paint. Model painted as usual with artistic acrylic Polycolor, MIG pigments, and oils.

Assemble this kit was easy. Problems perhaps made ​​only tracks. A little bit of Tamiya putty and the model is ready. This is an out production set, but from time to time, some one appear on Ebay, see here.

I started the construction of this kit with the intention to build an IS-2 that took part in the battle for Berlin. I plan to place it in a small diorama at the end.

During my research I’ve learned that IS-2 turrets were made by three different factories: UZTM, Hammer & Sickle and Factory no. 200. I opted for a Factory 200 turret, as the tank I want to build seems to have all its trademarks. Among these, some are quite noticeable: low casting seam, smooth commander’s cupola, big numbers on the back – usually one letter and a digit above a group of three digits.

Unfortunately, Zvezda provides a muzzle brake that is too short, so I had to buy an aftermarket one from Aber, which is far from being perfect. I had to rework the muzzle brake, as it lacks all of its casting marks and contours.

The rain guard above gun mantlet lacks the hinged front section so I had to improvise one. I added pistol ports and the caps of the gun trunnions by cutting small styrene discs. I thought the Mk. IV visors were too small so I replaced them with new ones made from scraps.

I added grab handles and textured the surface with Mr. Surfacer 1000. An old Italieri IS-2 provided a nice option for the commander’s cupola hatch, and has some interior details. Though remained closed, I decided to stick with Zvezda’s loader’s hatch, as I think it has very nice details. There are two pairs of bolts on this hatch that must be shaved off and replaced with holes with the same diameter.

The round mobile part of the 7.62 mm DT machine gun was taken from Italieri IS-2, as Zvezda’s seemed a little too flat compared to the real thing. I replaced the barrel with a syringe needle and added few bolts and other small details. The casting numbers are made from brass wire and simply glued into place.