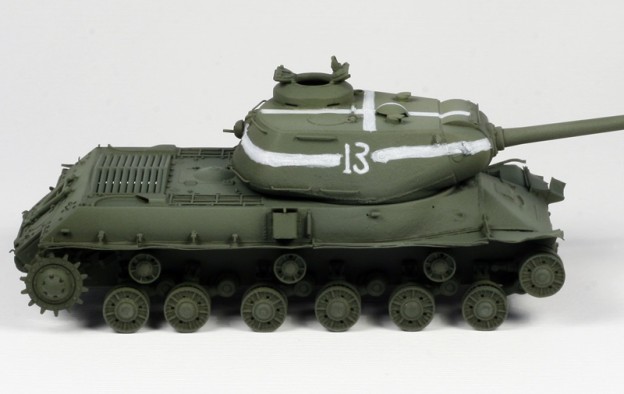 After the construction, I sprayed the model with Vallejo white acrylic primer (polyurethane), but I ended up with a grainy surface and not much adherence to the model. So I had to remove it and apply a new coat of Tamiya white primer from a can. Is lacquer based and worked better as it leaves a very smooth and hard surface.

After the primer, I covered the whole tank with Vallejo Russian Green and applied a little color modulation on more exposed areas. The white stripes and the turret numbers are hand brushed as it were in reality.

Next, I will apply an yellow oil filter to lighten up the green, and the rest of the weathering techniques. 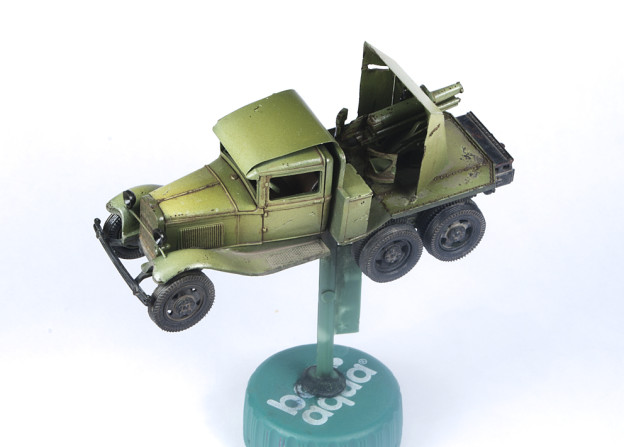 The Kit is very simple and neat. Several items was made ​​of tinplate. Replaced some parts that are not too ambitious such holes for viewing slots in the gun’s shield.

This is a small tutorial on the work done.Maybe it will help someone to work on such a small scale.Used only art paints (acrylic and oil), so I can not give numbers of model paints.After the final of this model, I’ll post a similar tutorial. 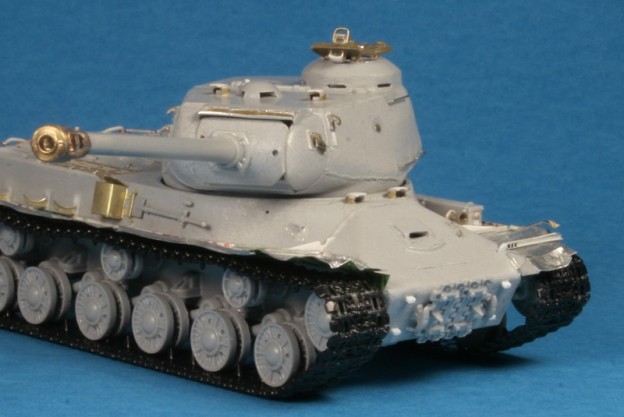 First of all, I will say that this is the my favorite WW2 tank: impressive, efficient and “sexy”. It was Soviet Union’s breakthrough after the KV tank family, a predecessor and the starting point of all modern Russian heavy tanks.

After the turret construction I started to work on the upper hull, by removing the original plastic fenders and replacing them with ones made from beer can foils. There is a photo-etched set from Part for the old PST and Italieri kits, but it doesn’t provide the fenders. The advantage of working with thin aluminium foils is that you can easily bend it; my reference pictures showed some very battered tanks, and all of them had bend, broken or missing parts of the fenders.

The joining lines on the nose of the tank are way too sharp and pronounced, so I had to sand it to gave a more rounded appearance. I then brushed and stippled a thin layer of Mr. Surfacer 1000 to obtain a rough casting texture, just like for the turret.

Next were the air intakes and their mesh screens. Zvezda offers a quite acceptable plastic replica, even better looking the the ones from Part’s set, which are nothing but some holes drilled into a brass plate. A Lipton tea bag proved again to be a great substitute, and I will definitely use it in my future builds.

I than added the MasterClub hexagonal bolts, after shaving off the original ones. I’ve described the whole process here. The lifting rings and other few small but time consuming details were next. The gun travel lock came from the Italieri kit, as it has superior details. The towing cables are from Eureka XXL and were a great addition.

One of the most difficult challenge was to make the supports of the side barrels. I used the main supporting ribs from Part (again, shortened with few millimeters), and glued can foil strips on top.

After that I moved to the lower hull, by adding the ammo loading hatch, which was missing. The tracks are very easy to work with, but unfortunately you can’t obtain a proper amount of track sag, or at least I couldn’t. The tracks are not attached permanently, for an easy painting, and I think is better to assemble them by gluing the ends and shave off the mounting lugs. This way you can test the sag and the tracks can easily be removed for painting (for this, the outer half of the road wheels and sprockets shouldn’t be glued permanently).

All in all, this is a good kit, but with a few shortcomings. I could add some more about other details, but I will let the photos speak for themselves. Most important, this kit provides a good foundation for those obsessed with details, like myself. A photo with the resin base, somewhere on the outskirts of Berlin, spring 1945 🙂