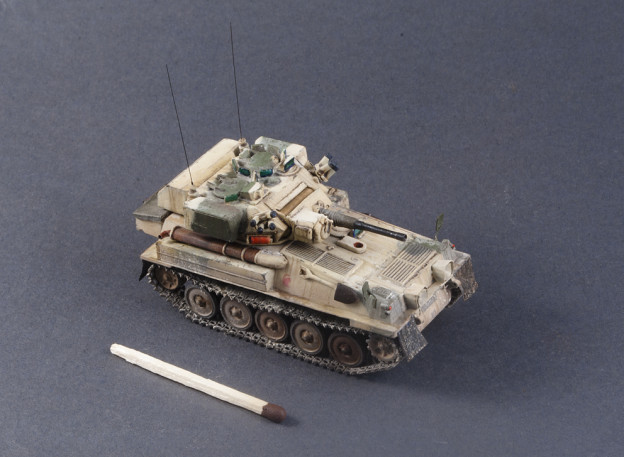 The FV101 Scorpion is a British armoured reconnaissance vehicle. It was the lead vehicle and the fire support type in the Combat Vehicle Reconnaissance (Tracked), CVR(T), family of seven armoured vehicles. Manufactured by Alvis, it was introduced into service with the British Army in 1973 and served until 1994. More than 3,000 were produced and used as a reconnaissance vehicle or a light tank.

Like all kits of “ACE” this set is rather complicated to assemble. Most of the details in the burrs. Release from burrs captivity account for almost all the details. For this reason, to achieve a perfectly flat surface is very difficult. The model is very small and it is very difficult to putty.

The only plus is the presence of a nice photo-etching.

Of improvements made ​​antennas, protection for headlamps roll from overcoat, shroud on the barrel.

The model was painted with artistic acrylic paint , MIG pigments and artistic oil.

Camouflage is done by using “PattiFix” This ACE model is available through our utility here, as well as the whole ACE range.