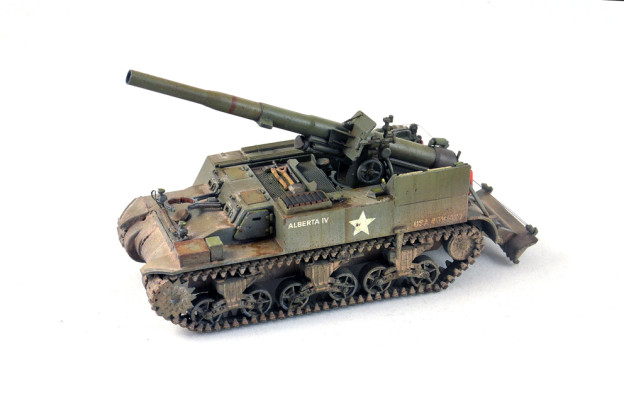 The M12 was built on the chassis of the M3 Lee tank; some sources claim that later M12s used the M4 Sherman chassis, but this might be a confusion with the M12’s use of “Sherman-style” bogie trucks with trailing idlers.

It had an armored driver’s compartment, but the gun crew were located in an open topped area at the back of the vehicle. It mounted a 155 mm gun M1917, M1917A1 or M1918 M1, depending upon availability, a weapon derived from the nearly identical French 155 mm GPF gun of World War I vintage. Limited storage space meant that only 10 projectiles and propellant charges could be carried on the vehicle.

An earth spade (similar to a bulldozer blade) at the rear was employed to absorb recoil. This layout—large gun mounted in an open mount at the rear, with a spade—was the pattern adopted for many years by other heavy self-propelled artillery.

The Kit is not simple.  In this kit a lot of details. It can not be built quickly. During assembly will be a small problem with connection parts of the chassis and body.

The model as always was painted with acrylic paint, tinted oil paints and MIG pigments. You can find this model to purchase it thought our utility here.