Unassembled plastic model kit in 1/72 scale of a Soviet WWII armoured train, the Kozma Minin, build at Gorky with population donations by workers of the Gorky city railway facilities.

Consists of an armored locomotive of type Ok (No. 139), two closed artillery armored platforms each armed with two 76.2 mm guns F-34 in the turrets of the tank T-34, as well as six DT machine guns and 1 to 3 open air defense platforms (divided into three compartments). with 37mm (or 25mm) anti-aircraft guns (61-K) installed in the front and rear compartments, and in the central compartment a launcher for M-8-24 rockets. 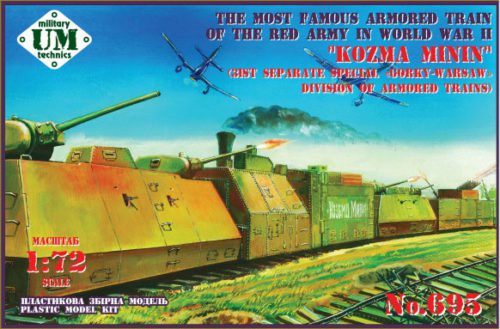