Unassembled plastic model kit in 1/72 scale of an Avia S-199, a post-war Czechoslovak produced Messerschmitt Bf 109, derived from G series. Once Czechoslovakia ran out of the original Daimler-Benz DB 605, which allowed a ventral gun synchronized with engine firing through the propeller spinner, they replaced the engines by Junkers Jumo 211 which didn’t allowed the ventral gun, instead they mounted two MG 151 cannon on gun pods in wings. 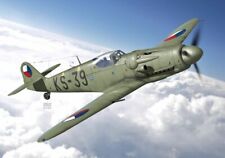