Unassembled plastic model kit in 1/72 scale of a French Panhard M-3 armoured car, an amphibious wheeled armoured personnel carrier developed privately by Panhard for the export market, reusing chassis and components from the Panhard AML. The car was produced from 1971 to 1986 in over 1800 units with a large list of operators, especially in Africa and Middle East, where the car have seen action in numerous conflicts such. 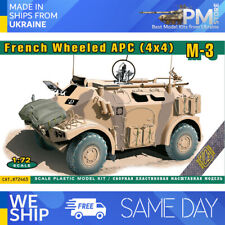