Unassembled plastic model kit in 1/72 scale of a German World War One submarine.

SM U9 (Seiner Majestät U-Boot) was a petroleum-electric submarine of the German Imperial Navy of WW1.
The double hulled U-Boat was 57.38 m long, 6.00 m wide, had a draft of 3.13 m and a displacement of 493 tons above and 611 tons under water.  It could dive to a maximum of 50 m in about 50–90 seconds.
It was powered by 1000 HP petroleum motors on the surface and by 1160 HP electric motors while submerged. With these U9 can speed up to 14.2 knots above water and 8.1 knots under water.
Armament consisted of six torpedoes that could be fired through two bow and two stern tubes.

The U9 was commissioned as the first ship in its class in July 1908 and launched in February 1910.

S.M. Unterseeboot U9 Class
These ships can be built: 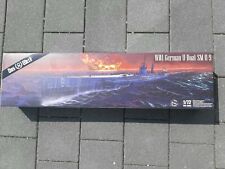 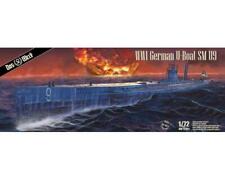