Unassembled plastic model kit in 1/72 scale of a Klemm Kl 25, a German light sports and trainer aircraft of the late 20s, a very successful design produced in over 700 units including licenses in the United States and United Kingdom.

L 25 Ia was one of the early variants produced around 1929 with an engine upgrade. This kit is part of the Klemm 25 series by AVIS, but features different parts for engine, engine cowler, tail, under carriage and other, being a quite different kit. Tooled and released in 20220.

Kit includes decal sheet with four racing/sports markings, three dated 1929 and one dated 1931, including 1929 Sydney to Perth air race, Challenge International de Tourisme 1929 (Europarundflug 1929 in German Language) one of the most important pre-war (WWII) aviation events, holded four times between 1929 and 1934. Also includes one marking for Elly Beinhorn, a famous German pilot, an air woman pioneer in the early 30s, famous by her long range flights. 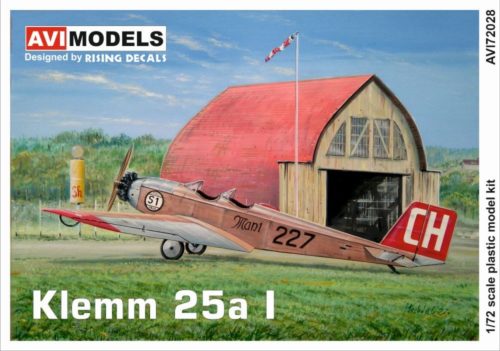