Unpainted plastic soldiers in 1/72 scale of an early German WW2 panzer crew soldiers, mostly distinguished by the large black beret worn over a hardened-felt helmet, which proved cumbersome and unnecessary and deprecated by March 1940. 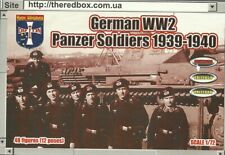