Unassembled plastic model kit in 1/72 scale of a Dassault/Dornier Alpha Jet advanced trainer aircraft developed in the 70s and introduced in 1977, mainly in both French and German air forces principally as trainer but also as Light Attack Aircraft. Germany retired his fleet in the 90s, reselling all the operational aircraft to many other nations interested in the type. A variant was the German Attack version.

This 2022 release add three new German markings to the series started in 2021. 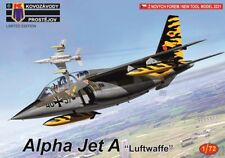