F-102A Delta Dagger, designed and manufactured by Convair，was the first supersonic all-weather interceptor and also the world’s first aircraft applied the ‘Area Rule’. There were two different wings for the F-102As: the ‘Case X’ and ‘Case XX’ wings. The F-102As were mainly deployed in North American, while a small number of them were deployed in overseas bases during its service. F-102As also served in Vietnam War. After being retired from USAF, a part of F-102 aircrafts were transferred to the United States Air National Guard, others were sold to Greece and Turkey.

See on Ebay »
Shipping to: US
From: GB
Seller: creativemodelsltd
99.9% Positive votes

See on Ebay »
Shipping to: US
From: GB
Seller: ludlow-trader
100.0% Positive votes

See on Ebay »
Shipping to: US
From: GB
Seller: ludlow-trader
100.0% Positive votes 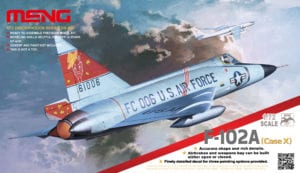 Nederlands
We use cookies to ensure that we give you the best experience on our website. AcceptDeclineRead more
You can revoke your consent any time using the Revoke consent button.Change cookies configuration