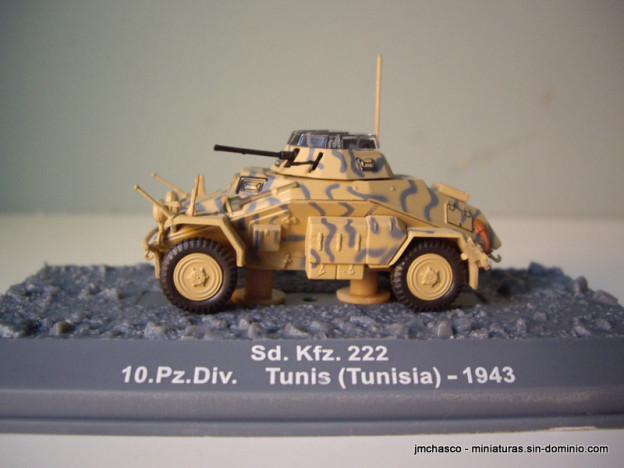 Sd. Kfz 222 was successfully used in first campaigns, across western Europe, but once war arrived to Africa and Eastern Europe, the poor off road capabilities of this vehicle were showed. This vehicle line based on Horch 108 chassis, were manufactured in three primary versions. Sd. kfZ. 221, armed just with an MG 34. A 221 variant armed just with a 28mm sPzB41 gun. The Sd. Kfz. 222 version, armed with the 20mm gun and MG 34, and the Sd. Kfz. 223, a communications vehicle, armed with a MG 34 machine gun.
The 222 version mounted a closed turret, the same than 250/9, against grenades.
As the war goes ahead, Sd. Kfz. 222 were replaced in their functions with Sd. Kfz. 250 or their 8 wheels brothers, as Sd. Kfz. 232.
Russian army takes the 222 as model to develop their BA-64 vehicle. One more time, Altaya’s quality isn’t enough to defeat their Diecast competitors, and to compare them with a parts model.