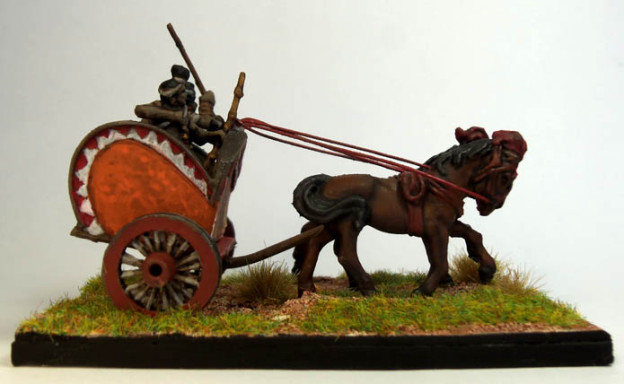 Chariots were introduced by Aryans in the middle of 2nd BC century, and they were permanently used by the southern kingdoms while northern kingdoms were too mountain to use them. In this age Indian was a convulse territory with a lot of kingdoms fighting between them. Chariots were usually riding by noble men and was often used to charge against infantry formation to spread them as cavalry do. They also have an important physiologic component, see a two or four horse chariot charging against you… well…

Hät set comes with three teams of two horse chariots, they are well designed, better than the box illustration, which shows two lower lateral parts. You also get three men for each chariot, a driver, an archer and a noble men. They comes with a base, so can be useful for other things. Set also comes with some “estrange” extras, an elephant rider and an infantry man who can be used as crew instead of one of the above mentioned or you can reserve it for future uses as i did :). Set also comes with a beautiful umbrella which i used with the elephant set. As the mast is too soft i replaced it. Maybe this figures looks to tick, but i like this style. Although the poses looks a bit strange in a first sigh they take a better appearance once they are put together in the chariot. Maybe you want to remove the base, but be careful with feet, cut this very soft plastic can achieve a disaster ! They fit tight even without bases so i prefer to don’t this.

Figures are quite well detailed and even if they are soft plastic the chariot parts fits very well, even without glue. This time i used a different combination for the Indian skin, they are black primed and a layer of Khemri Brown. Washed with Devlan Mud and two lighting coats, one with Khemri Brown and second with a mix of Bleached bone and Khemri Brown.

For the horses i used Scorched Brown as base coat, washed with Devlam Mud, highlighted with Bestial Brown. Belts in red, straps also in red, they are made with slim wire (from loaf :)). Put them prior to painting, they need to drill, i recommend to drill a bit tick than the wire is. Brown have been used for the chariot with some red, orange white and metal, not the best painting, but, it is for the battle field, not for a contest 😀

Although always there are different opinions about Hät quality or style this one is a quite well engineered set and easy to built. This one completes the Hät’s ancient Indian sets with infantry, cavalry, elephants and chariots, what more do you want ? ;). Even the odds it is a cheap and quite nice option for gaming, yo get three full chariots with some extras.
You can buy this set here.