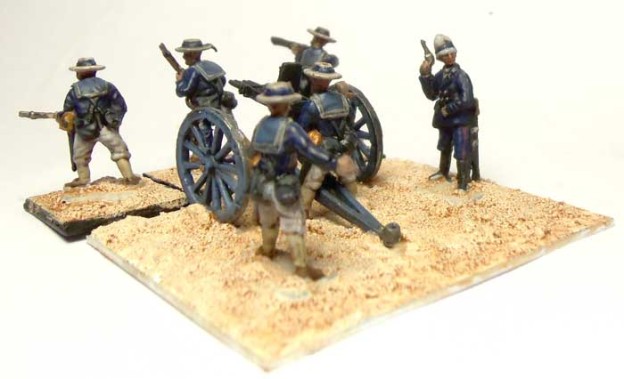 Here I bring you the latest work that I have done. It’s the 8180 HAT Miniatures reference that brings us a set dedicated to the British colonial wars. This set shows a Gardner gun of the Royal Navy which could be installed both on a ship and on land. The Set includes four of these guns with support for ships or wheels to be used on the ground. It comes with two gunners, an officer, and three sailors with rifle. Likewise, it also includes three additional heads wearing the typical sailor hat, if you want to represent them by shooting from a boat. The material of which it is made is the typical HAT soft plastic to which we are accustomed, which has given me more than one problem, taking me even having to replace and remodel parts in the assembly. Modelling in the Canyon is decent, but the soldiers is nothing short of horrible especially in the faces and the sables. It exasperate me so much that I decided to paint them as they were, rather than lose a big amount of time in remodelling the non-existent faces, good luck for us, with the hats they are hardly visible.

To paint them has been simple, just I have applied the base colour over black primer colour, then I applied a layer of Devlam Mud and after drying, I applied a light with the same tone of the base colour. The figure does not deserve more effort, because although it is a good acquisition for the cheap and the quantity, the quality offered does not give satisfaction in the painted.

I recommend you to change wheel and barrel joints by metal bolts. Even so, if you want to form a Colonial army is a good acquisition which you can buy here.