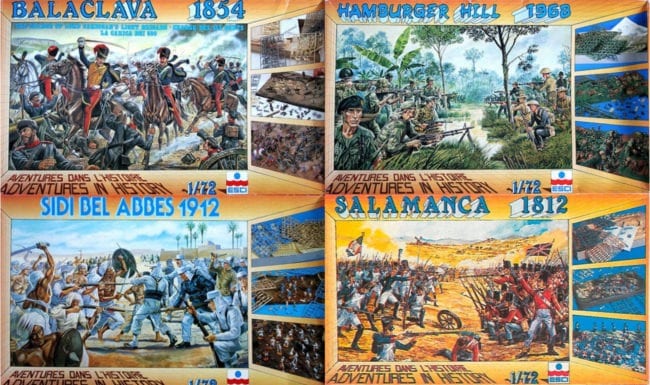 Status: Out of production

Over the time, ESCI released 15 references under this suggestive series, Adventures in history, re-using their figures/plastic soldiers line, packed together with a vacuform base and sometimes the accessories pack from the brand. This serie excluded WW2 topic, which had its own series.

The largest part of the series belong to Napoleonic era, which had also the most extense figures catalogue. The playsets were always paired in between two enemy forces.

All these boxes are long ago out of production and they are collectors items. Despite this, most if not all the figure sets has been re-released later by Italeri, and second hand market for original ESCI boxes is still noticeable, while these playsets from Adventures in History series, are hard to find, specially in good conditions, and usually, expensive.

This box contained the figures from two full boxes of ESCI – 238 – Muslim Warriors and another two of ESCI – 237 – French Foreign Legion plus content of one box of ESCI – 216 – Battlefield Accessories.

Except for collectors, it’s usually easier get all these figures in their latest shape as Italeri re-releases, Italeri – 6054 – French Foreign Legion and Italeri – 6055 – Arab Warriors. The content of the ESCI 216 Battlefield Accessories box never has been re-released by Italeri in the same format, although some parts were reused in other boxes.

These box contained two full boxes of ESCI – 232 – Colonial India British Infantry and two of the ESCI – 238 – Muslim Warriors, plus one box of ESCI – 216 – Battlefield Accessories, and a vacuform base, shared with several other boxes of the series.

As we have seen above Italeri – 6055 – Arab Warriors was also re-released by Italeri with unchanged content, as well as the British infantry as Italeri – 6187 – British Infantry and Sepoys.

Italeri re-released British Infantry figures as Italeri – 6058 – Napoleonic British and Scots Infantry and by now the French Line Infantry hasn’t been re-released, but did its own version instead.

As discussed in the Salamanca 1812 box, Italeri never re-released the ESCI French Line infantry, but the Imperial Guard can be found as Italeri – 6072 – Napoleonic French Grenadiers. The Prussian & Austrian mixed ESCI box also hasn’t been re-produced by Italeri.

None of these ESCI figures has been re-released by Italeri.

Both plastic soldier boxes were later re-released by Italeri as Italeri – 6050 – Zulu War British Infantry and Italeri – 6051 – Zulu Warriors and also released an homonym playset of their own, Italeri – 6114 – BATTLE of RORKE ‘s DRIFT – Diorama Set which is equally hard to find nowadays.

Napoleonic range was the most extense in ESCI catalogue of figures, even over WWII (Fi we don’t count the hard plastic figures kits), so it’s not strange that they produced several Napoleonic playsets, and once it arrived the time of Waterloo 1825 battle, ESCI decided to create two separated playsets.

ESCI only released two Crimean War figure sets and of course they were included in this playset box, containing two full boxes of ESCI – 221 – Crimean War Russian Infantry and Artillery and two full sets of ESCI – 220 – Crimean War Lord Cardigan’s 11th Hussars, the famous Battlefield Accessories and a vacuform base.