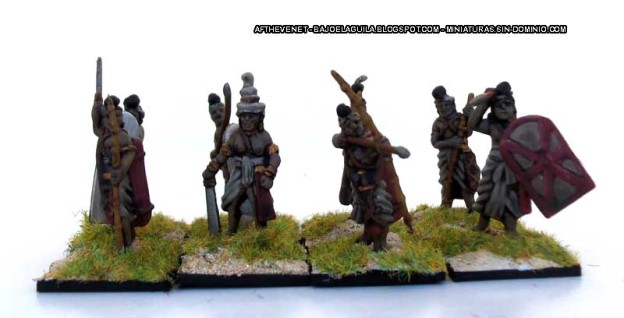 As many other ancient armies, Ancient Indian ones was mostly composed by infantry men. Forgotten by history, these men taken from the lower social caste, fight against Alexander the Great, but also joint him after Poros defeat, in Hidaspes battle.

Most of the Indian infantry was formed by archers and spear-men, well represented in the set. They used bamboo bows almost so tall as they was. Arrows were carried in large baskets in their back. Some figures wear leather protection on chest, identifying them as heavy infantry. Armour was very uncommon in those armies, not so much as the set represent. Second Row second figure is a “wild tribesmen auxiliary”. They usually works as archers without sword and he is the only depicted in the set. Figure wearing feathers is mountain-men. The only difference is the absence of sword, and also is the only figure depicting these men. The most interesting figure here is the Female Guard member. After Chandragupta Maurya king these guards was very common. Although is not sure is they fought in the battle field, is a nice detail on the set. Clothes and weapons are well depicted here, although some variations could occur varying geographical zones and periods, figures are enough generic to cover quite well the subject.
Sculpture quality looks like all the Ancient India range by Coates & Shine. They are some flat figures, but flash is non-existent. About the paint you can take a look to our other worked Indian sets, such Chariots and War Elephants..

You can find this set taking a look at our utility here..