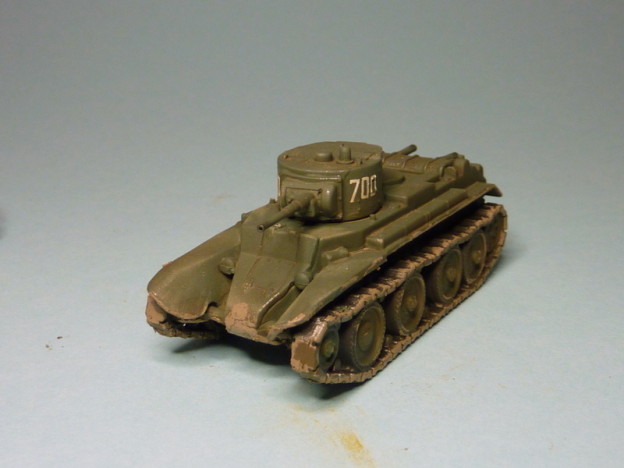 This pair of models depicts Russian BT-7 Light tanks that entered service with the Russian army in 1935. It saw action in the Soviet-Japanese board war right up to the end of the second world war. It’s rather more famous successor was the T-34 and we all know a little about that tank!

This tank was armed with a 45mm l46 main gun and normally two 7.62 DT machine guns, and a crew of three. This set consist’s of two kits of twelve parts each. The parts are some what “robust” due to the fact they made with war gamers in mind, so will stand up to some handling. The turret hatches are separate so can be modelled open or closed. I didn’t have any crew so I went for the lazy option of closing both.

The fit was great on these kits and I built them both in half an hour! I drilled out the exhaust pipes and used a pair of RB model 37mm barrels instead of the ones you get with the kit. I am now trying to use metal barrels on my models if I can get them for the kit I am working on. The certainly add to the model and are worth the investment. Being lazy I wanted to try out the Humbrol spray cans, to see if it would save time and effort cleaning my airbrush. My photograhy leaves a lot to be desired, because the top tank is sprayed with 30 dark green and the bottom tank was sprayed with 86 olive green. You tell the difference in the flesh but the pictures don’t quite tell the whole story. I also learned not to try it after a few pints of larger. I kept touching up bits and put it on a bit thick in places.

The tracks was painted before they were added and the wheels got a coat of Vallejo panzer aces dark rubber. The only down side to Pegasus kits is the lack of decals. I bought some MiG T-34/KV-1 decals on EBay in a job lot so I thought why not.

The air brush came out for another job so I gave the side’s of the tanks a quick blast to give a more weathered look. Also a good wash with Promodeller dirt wash was applied and the tracks got a final smearing with Tamiya weathering mud stick. It is just like a lip stick and cn give quite a good look if done correctly. Then an attempt at wear and tear by rubbing a pencil lead over the edges to show exposed and wore metal. A final go with Tamiya weathering powder to finish.

Pegasus vehicle set are a good option for gamers, their whole range is available through our utility here. 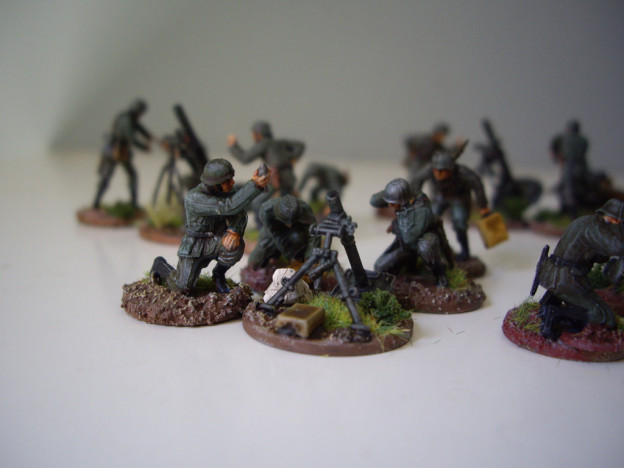 A great set, all the poses fit well his task, in a close interaction with mortar or between them. The figures have some separate parts, like harms, some head, etc. All parts fit well.
Almost are the figures are unique, although the poses are twice, the figures have different equipment on back. I also have added some Kar-98k rifles and two MP40 to complete the figures.
A very well done set, which cover the subject and fits perfectly war-gaming needs. His competitor from Armourfast hasn’t so hight quality on sculpture.
The 81mm mortar was used along all the war. The 120mm was a copy from Russian’s one , and was developed during 1942.
Added to the mortar crews, which are completes for each mortar, there are a radio team, in great poses, and an officer. For reference and/or inspiration take a look at Mortarsinminiature.com