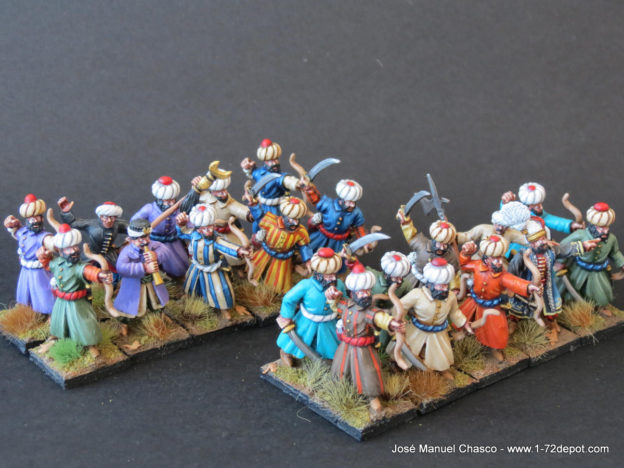 Azabs (Azaps) were an irregular volunteer infantry of the Ottoman empire, they were only paid during war times, so they mainly only existed during wars. As volunteers they were free to left the army at any time. they hadn’t any kind of train or uniformity, and commonly they were armed with swords and bows as Warlord has depicted, although in the time, wasn’t uncommon to see them armed with their own fire arms.
Warlord offers only one blister for this subject, with 4 different poses, and no specific command. So i used here Janissaries’ command figures (i swapped heads of NCOs by Gripping beast plastic arabs heads).
Irregular troops are the pain of the painter… you have to use many variations to depict this lack of uniformity. I chosen several main colours in groups of 2 or 3 figures per colour and then i painted 3 stripped single figures to give the group more diversity. Again a bit of special work have been done in the officer.
Opposite to Janissaries figures, these ones aren’t flat at all, they even seems to be wearing a sort of great coat, as in winter times.