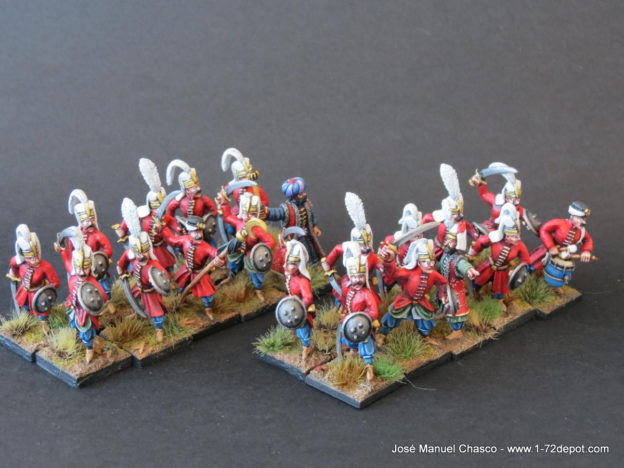 Janissaries were a military elite during a few centuries in the Ottoman-Turkish empire who evolved from military to socio-cultural ambit of the Ottoman empire.
It’s a very interesting topic to research, they did an extensive use of the fire-arms, but as any other army of the era, other weapons were part of their corps. To start to learn more i suggest to take a look at wikipedia. They are usually considered as the first modern army.

Warlord have several options for these guys, but in consideration here, we have Janissaries armed with sword and shield, plus some command figures.
All the poses are mainly looking forward and sided… so once ranked the unit looks a bit ugly, they trends to look a bit flat. One of the poses, advancing, is terrible odd. A part of that, sculpture is good, mould are news, and you don’t have too much work cleaning metal from figures. No metal excess, no many mould lines.
Red and blue are two common colours associated to Ottoman-turkish armies, although as uniformity it belongs to more modern times than the ones depicted by these guys, they are the main colours i choose for this unit.
A constant in this army, i tried to do something special for the Officers.