A mixing up of already released things by Italeri, to commemorate the D-Day 75th anniversary.

Seems that there isn’t a vacuum formed base included. 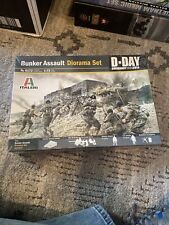