The type, PZL P.11, was introduced in the mid 30s, produced from 1933 to 1936, was in service during the German Invasion in 1939, being P.11c the most numerous version fighter in service, was also the most numerous produced, around 175 units. This variant was armed with four 7,92mm KM Wz.36 machine guns.

Despite of being technical inferior to the German fighters or bomber which took part in the 1939 invasion, around 110 kills were credited to P.11 fighters, for around 100 losses in air combats. It’s also stated that a P.11c was the first aircraft shot down of the war, on the night of September 1st. And also a P.11c claimed the first aerial victory for the Polish Air forces, just some minutes later than the first lost.

At the end of the campaign around 6 P.11 flew to Romania, where were retained and used by Romanian Air Forces.

This kit is the 4th P.11 variant released by the brand, a great coverage for the topic. Includes decal sheet with 3 different markings.

Canada. Choose your country from location/language menu to get proper results for you. If your country is not in the list try default EN-U.S. or try the closest location if any. 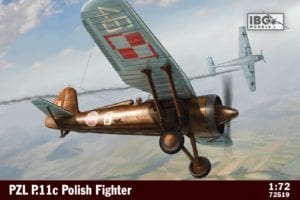 Amazon and the Amazon logo are trademarks of Amazon.com, Inc. or its affiliates.