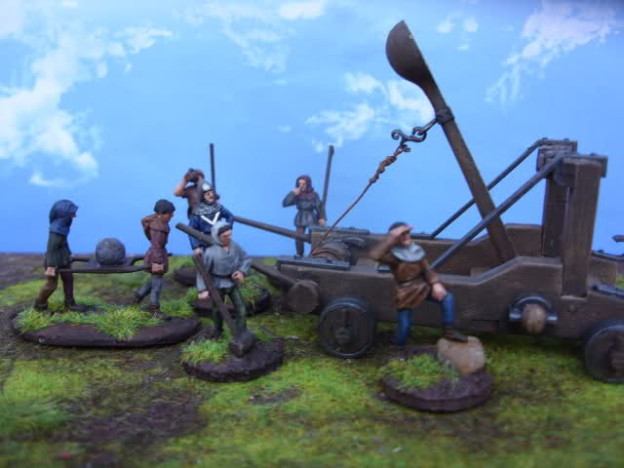 If you collect 1/72nd medievals then this set is a must.

This is useful not only for medievals but also for Ancients, particularly the Romans / Macedonian. Although such devices in this size did exist, the scorpion in the kit is still a big one in 1/72nd scale, and would have been a rarity rather than the norm. It fits alongside 1/72nd figures well but is also useful for 28mm. The kit is a bit more complicated than the Catapult but the instructions are clear and the parts fit together well. One thing that I would recommend…don´t use the bits of plastic meant to represent the rope meant ot wind the device up, but use sewing thread. Not only does it look more realistic but the “plastic” ropes that come with the kit are too short! Two bolts are supplied as ammunition but small balls can be used as these devices were used to launch stone “shot”. One minor complaint. The torsion ropes attached to the arms. Both of them are turned in one direction, namely clockwise (from top to bottom). In a real scorpion they would be wound up in opposing directions.

Again, a useful bit of kit for ancients as well as medievals. The kit its self isn’t too complicated, the instructions are clear and it fits together easily. The wheels can be attached as free rolling or if wished simply left off, which was probably more likely when the device was put into position in a siege. The throwing arm can be set at any angle, from vertical (just fired) to horizontal (being loaded or about to be fired ) and everything between. The kit also contains two balls, which are useful to represent stone ammunition. Again, I suggest using thread or thin copper wire to add the tensioning ropes. As with the scorpion, the torsion rope at the bottom end of the throwing arm is incorrect. It is represented as being wound up in one direction along the whole of it´s length. If this was to be replicated in reality the arm would move to the right.

Three are supplied, are easy to build and a good addition to the set.

The set is available through our utility here.