Unassembled plastic model kit in 1/72 scale of a F-35 LIGHTNING II, a modern U.S. Stealth fighter, B version is the short takeoff and vertical landing (STOVL) variant of the aircraft.

Kit consists of 101 parts. Includes decal sheet with two markings, DT01 and DT02 from the U.S.M.C. VMFA-242 (Marine Fighter Attack Squadron 242) based at Air Station Iwakuni, Japan. In October 2021 two F-35B from the group operated from the flight deck of the Japanese carrier JS Izumo (an helicopter carrier being transformed into light aircraft carrier) and the first time since WWII that a fixed wing aircraft operated off a Japanese warship. 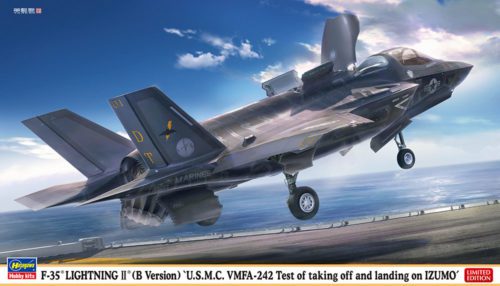