Unassembled plastic model kit in 1/72 scale of a Swedish fighter-interceptor Saab 35 Draken, introduced in the early 60s after over a decade of develop, being one of the first fully supersonic aircrafts, first double delta wing design, first capable of perform Cobra maneuver and able to exceed Mach 2 in level flight.

FS designation is a Finnish designation, originally Swedish J 35F1s fighters variant which introduced better avionics and electronics produced between 1965 and 1972 in over 200 units, while ÖE is the Austrian designation fo their Drakens, which were an hybrid between Swedish D and F variants, without air-to-air missile capabilities due the sanctions over Austria still vigent at the time. 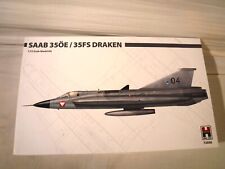