Unassembled plastic model kit in 1/72 scale of a British 30s and WWII Vickers Wellesley medium bomber, with around 177 units build and a discrete career as bomber.

The kit is typical Matchbox kit, with too engraved panel lines and little detail for the cockpit and even less in the gunner position. On the good side, most of the castings of the kits are very clean, assembly should not have problems and though the box don’t advice it, this kit includes two variants of the Vickers Wellesley, and standard Mk.I bomber or a Type 292, three aircrafts that were modified for the RAF’s Long-Range Development Unit Flight, that flew non-stop for two days from Egypt to Australia, a distance of 7,162 miles (11,526 km) setting a world distance record. As bomber, the performance of the Vickers Wellesley was very discrete. This kit included different nose parts and engine covers for each variants as well as most of the underwing and under fuselage parts of the bomber variant are not used in the long range variant.

The kit included decal sheet with one marking for each of the variants.

It took 45 years till Valom decided to produce new kits of the Vickers Wellesley in 1/72 scale. Valom kit is better detailed but not exempt of problems. As they are the only two options we still would recommend the Matchbox one for beginners. 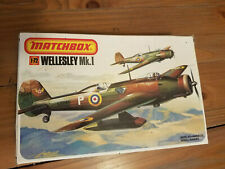 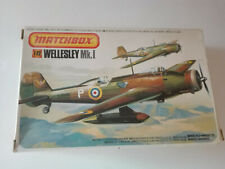 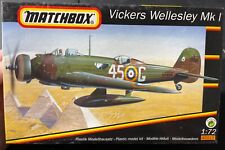 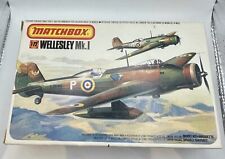