Both of them consisting of 5 different figures and some accessories.

The model kits are: 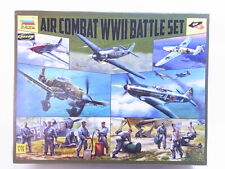