Unassembled plastic model kit in 1/72 scale of a German WWII fast attack craft (Schnellboot), named e-Boat by Western Allies, S 38 class. The models shows the unarmoured bridge of the original series (this maybe is what brand wants to refer by the 1942 addition to title, since armoured bridge was introduced in 1943 and many already built boats were retrofitted to this standard). Models shows a Bofors 40mm as main armament plus a Flak 20mm, together with the two torpedo tubes.

Kit includes a large PE details amount, as well as metal barrels for both Bofors 40mm and Flak 20mm. Hull is moulded in a classic two pieces way. Decal sheet seems to include two different markings.

See on Ebay »
Shipping to: US
From: CN
Seller: xfree-hobby
99.9% Positive votes 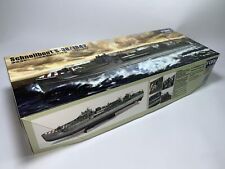 See on Ebay »
Shipping to: US
From: CN
Seller: dawngrocerystore
99.5% Positive votes