Unassembled plastic model kit in 1/72 scale of a U.S. Redstone rocket and a Mercury spacecraft, both part of the Mercury program developed from 1958 to 1963, using both Redstone and Atlas launchers developed from the respective ballistic missiles programs. 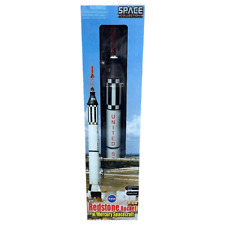