Unassembled plastic model kit in 1/72 scale of a soviet 4×4 Gaz-66 truck, introduced in mid 60s, was one of the main trucks of the soviet motorized divisions and is still employed in former Soviet Union countries including Russia (as per 2021). 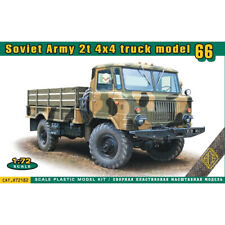