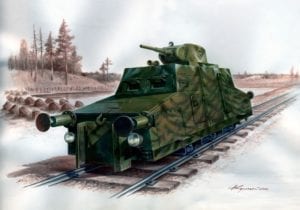 Well, this is a strange case in the war and also in the small scale world. This armoured train was constructed for sure, as it appear in some documented pictures, but there are no more information about it. It was constructed by Finns, probably after the Russo-Finland war, with captured Russian material and is the “unique technical object of the Second World War”.