Unassembled plastic model kit in 1/72 scale of a Polish PZL-104 Wilga light utility aircraft, capable of short take off and landing, introduced in the early 60s and which remained in production till around year 2006 with over 1000 units produced in several different variants and improvements over the years.

Variant 35H is a float plane export variant which was produced in cooperation with Canada in the late 70s.

Amodel kit is a re-issue of an older release, with same code number. Kit parts has some flash, may not be a kit recommended for beginners.

Kit consists of around 44 parts and includes decal sheet with two different markings to choose. 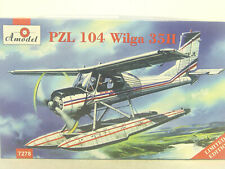