This box contains 24 figures in 6 different poses and 4 guns. You can choose between 2 types of barrels, and they depict a late medieval artillery, not only Burgundian, which can be extended to a very early renaissance, for example in Spanish hands.

The box consists of a single sprue repeated four times. Six figures per gun is a generous quantity, but a close look tell you only four of them are crew men, there is an interesting figure resting and drinking and lastly an officer who wears a noticeable too big sword, kind of doppelsoldner swords but too short, so it doesn’t looks quite well. The crew men poses are correct and all of them has a role in the gun management.

The gun themselves are quite nicely done, their amount of flash or mould lines is very acceptable, as well as the carriage is and the simple design of the guns allow to clean it with relatively low effort. You get one single carriage, very simple which is ok for the kind of artillery depicted and two different barrels to choose from, both looking good. The kit misses of a lock for the barrel elevation mechanism but is something relatively easy to add by yourself.

Here we find the first of the problems, very common on Mars artillery sets, the way wheels are attached to sprue means you lost all the detail in the external side, and there should be some for this era wheels, as they weren’t a single smooth piece, and also the process to detach them from the sprue means you will probably end with a not perfectly round wheel, both things not so easy to remediate. Our best recommendation is a very sharp cutter to remove them and do it very slowly. You may need also to rework the wheel holes to attach to the carriage.

A close look to the figures outline the flaws of the kit, and even more, common flaws of the brand in this stage and for years, the quality of the sculpture is not top class, not because proportions or sizes, that some dislike, but the first three figures below, especially noticeable in their backs, how the leather armour (or whatever it is) is punched exposes a lack of skill or interest in detail the figures.

The problem about faces detail is also evident, and that even if these are not the worse example of the brand, as well as hands, another common fail of the brand.

But the real terrifying is the mould itself, much more than the sculpture. Again without be the worse case, figures has a too much mould line or flash, never easy to remove from a soft plastic and irregular surface.

We find this kit interesting, with the common flaws that almost every hobbyist knows about mars, but they depict an interesting subject, poses are good, specially the man sitting (even if he’s not part of a gun crew) and the gun themselves are pretty good too. The mould ruins even more and already weak sculpture in the figures details and the problems are not easy to fix.

The kind of artillery matches pretty well what you can expect for the second half of the XV century, not only burgundian, but across europe, and wouldn’t be strange see such guns during the early Italian Wars or in the Conquistadores hands and their quest in America. Often they have been depicted with the same kind of barrels and even more rudimentary wheels. The kit is useful for anyone interested in those periods. 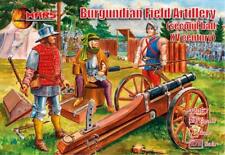 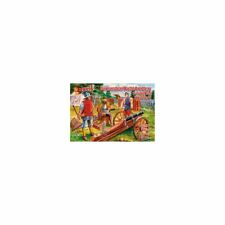 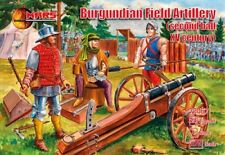 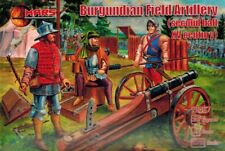 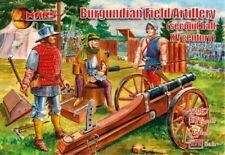