German’s Sd.Kfz.251 halftrack series proved highly versatile throughout WWII, and numerous variants were produced over the course of its life. One version is Sd.Kfz.251/7 Pionierpanzerwagen, which was issued to combat engineers in Panzer Pionier companies. This new Sd.Kfz.271/7 Ausf.C version offers two options for modelers to build either a normal 251/7 w/MG or a special one with 3.7cm PaK 36 mounted on the front.

See on Ebay »
Shipping to: US
From: US
Seller: burbankshouseofhobbies
100.0% Positive votes 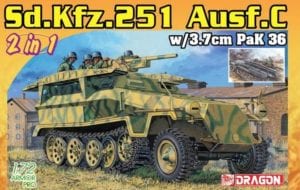 See on Ebay »
Shipping to: US
From: CN
Seller: invisibleshop699
98.6% Positive votes

See on Ebay »
Shipping to: US
From: CN
Seller: wonderland*
98.9% Positive votes

See on Ebay »
Shipping to: US
From: CN
Seller: shoppingworld85
99.0% Positive votes