Kit features
★ Reproduce the F-4E (early model) during the Vietnam War.
★ The tip shape of the nose Vulcan cannon is supported by additional parts.
★ RHAW antenna on the vertical stabilizer is also supported by special parts.
★ Reproduce the Southeast Asian (SEA) camouflage aircraft.
★ The central part of the fuselage is integrally molded with a slide mold.
★ The conspicuous parts division line is divided by the panel line as much as possible.
★ The inside of the cockpit and other details are precisely reproduced by laser engraving.
★ The small holes lined up in the splitter vanes are also reproduced by engraving.
★ The inside of the heat exhaust hole in the abdomen of the aircraft and the inside of the leg storage are precisely reproduced.
★ The canopy can be opened and closed. The closed canopy is a separate part.
★ The horizontal stabilizer is designed so that the mounting angle can be easily and accurately fixed.
★ The heat-resistant plate on the tail is a separate part. Can be assembled after painting.
★ Total length about 266 mm, total width about 164 mm, total height about 69 mm when completed
★ Number of parts: 156 + decal 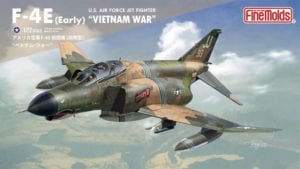 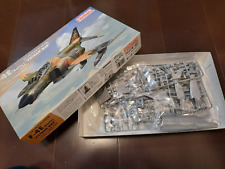