Unassembled plastic model kit in 1/72 scale depicting a turret from the German WWII battleship Scharnhorst, the lead of its class (only other sister ship build, the Gneisenau), which were fitted with three batteries like this kit depicts, triple 28cm (11 inches) C/34 guns.

The Scharnhorst was sank by the HMS Duke of York of the Royal Navy in December 1943. The sister ship Gneisenau started the process to replace the three triple turrets by three twin 38cm turrets, but the process never was completed and Gneisenau was sunk by Germans to block the port of Gdynia in Poland.

Kit includes metal barrels, markings for two specific turrets and display base simulating a portion of the deck. 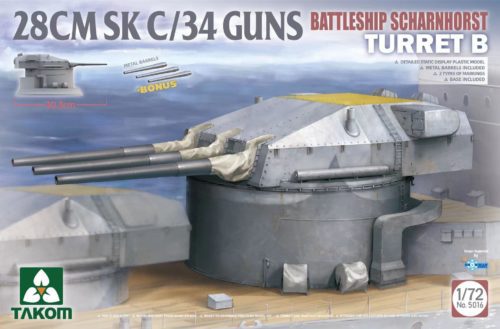