Unpainted and unassembled plastic soldiers in 1/72 scale of German WWII Paratroopers (Fallschirmjäger) in tropical uniform with support weapons, a 8cm mortar (Granatwerfer 34) the standard infantry mortar of the German army during all the WW2, a very successful design, and a 10.5 cm Leichtgeschütz 42, usually abbreviated as just LG 42, a recoilless gun which theoretically was mainly issued to independent artillery batteries and battalions, probably for paratroopers it would have been better use the LG 75, which was largely used by Fallschirmjäger units since crete.

The box contains 40 figures (in 10 different poses) and 8 support weapons, 4 mortars and 4 guns. Poses are very appropriate for their role and nicely sculpted in very dynamic poses, 5 of them are intended for the mortar and the other 5 for the gun. Sadly, mould and moulding are not so good as sculpture, which decreases a lot the final quality of the kit, flash and mould lines are clearle noticeable, and since weapons are moulded into the same sprues they look hard to clear and put together. 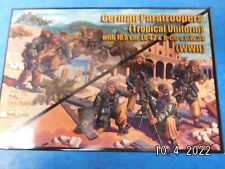 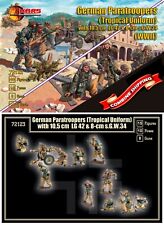 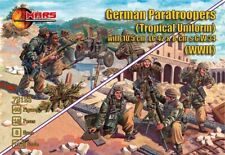 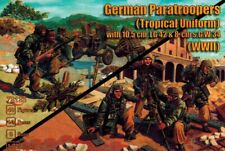 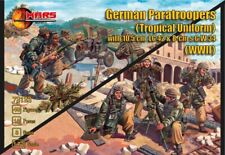