Unpainted plastic soldiers in 1/72 scale of a mix of historical and video games and contemporary TV series and Cinema influences. Kit contains 33 figures, where 29 are troops while 4 (some bigger figures) are special characters/heroes being those the one influenced by contemporary media, also in its bigger size.

The Three kingdoms, from 220 to 280 AD, was the tripartite division of China among the states of Wei, Shu, and Wu. Some of the figures remind to those included in the Caesar – H043 – Chinese han dynasty troopers, and is not strange, since the Three Kingdoms were established just after Han Dynasty fall.

*A second box type for this same reference and content is starting to appear, with the subtitle of Sichuan Province Set 1 rather than the initial Shu Kingdom set 1. 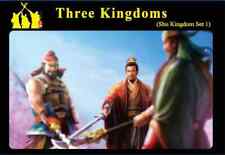