The Army of Pyrrhus of Epirus
INFANTRY ALLIES / MERCENARIES Set 2

Unpainted plastic soldiers in 1/72 scale, depicting, as the very descriptive title by the brand already tell us, mercenary or allies infantry of the army of Pyrrhus of Epirus, during the so called Pyrrhic War, 280-275 BC., which was a conflict between Republican Roman and Epirus, an ancient Greek state settled in today northwest Greece and Albania. During this war Epirus achieved some initial victories at the cost of heavy casualties, and while Rome could refill their legions Pirus had more problems to recruit more allies or troops. At the end of the campaign Rome asserted its hegemony over southern Italy and the Hellenistic world started to pay attention to this growing Italian state.

This was was also the first time Rome faced Greek professional mercenaries and such men are depicted in this set. 1:72 Figures 045 the army of Pyrrhus of Epirus allies/Mercenaries Linear - A NEW 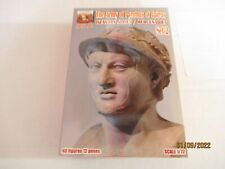