F-4J was one of the specific variants for U.S. Navy and U.S. Marine Corps, later these were upgraded to S variant. J variant was an upgrade of B variant with an emphasis on the air to air combat but also with expanded ground attack capabilities. Few more of 500 units were built of this type. Kit includes 3 deal markings for the U.S. Marine Corps, 1972 – 1975 era.

Initial release includes a pilot figure as bonus, it’s marked on the front box. Later editions may not include this. Kit consists of 147 plastic parts and features some of the more advanced moulding technologies (slide moulds) as well as laser engravings. Once built kit measures 248mm length by 164mm width. Kit is based on previous F-4 Phantom II released by the brand but includes a new sprue with the specific parts for the J variant. 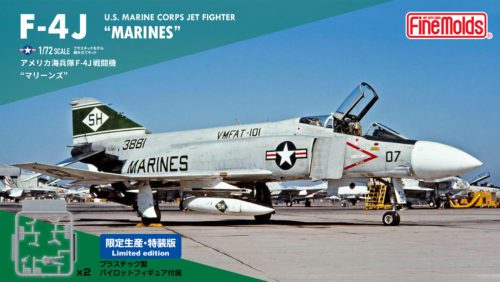