Unpainted plastic soldiers in 1/72 scale of Italian World War I Arditi soldiers. Arditi (“The Daring”) were elite shock troops as the German Stormtroopers. Trained to break into enemy lines mainly by using hand grenades and daggers.

Arditi was considered as a separate corp of the army, and they were classified by its precedence, together with their uniforms, they were classified as Red Flames (Bersaglieri Arditi) wearing the Bersaglieri red/crimson fez, Black Flames (Arditi Infantry), wearing a black fez or regular helmet and Green Flames (Arditi Alpini) wearing the alpini cap.

Looks like the kit depict all of these types together, reducing the number of poses for each one. Box contains 48 figures in 8 different poses, some of the poses are x1 and other are x2 within the sprue, and 4 equal sprues are included.

Sadly even a single figure is using a dagger, and just two are using hand grenades. Other elements that were common to Arditi units, have been included in the HäT – 8222 – WWI Italian Heavy Weapons kit. 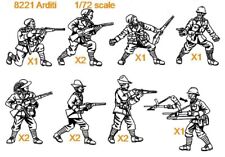 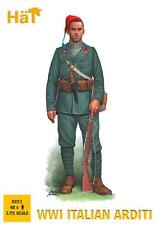 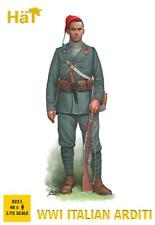 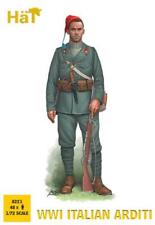