Unassembled plastic model kit in 1/72 scale of a Soviet self propelled assault gun SU-76i, built over the German captured chassis of Panzer III and StuG III, acquired in large quantities during the Stalingrad campaign.

The kit is very accurate, includes a metal barrel for the gun and resin curved tracks segments to complete the hard plastic parts provided, so basically each track consists of 4 segments, two hard plastic and two curved in resin. Kit includes some other detail parts cast in resin.

Pioneer tools are moulded in the hull. The kit includes a decal sheet with 5 markings, though two of them are fictional. 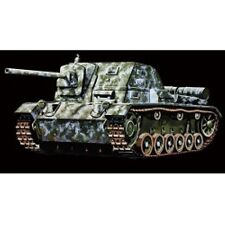