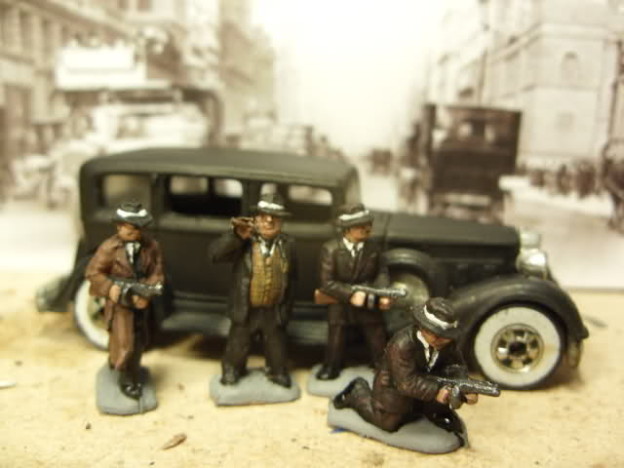 RedBox sometimes gets a bit of bad press for it´s sculpting but not from me. They come out with some pretty original ranges and subject matter, and this set (along with the “sister” Policemen and citizens) is no exception. My only complaint about the set is the flash. Virtually every figure had some flash and a couple were virtually “buried” in it. Still, with a fine scalpel and a bit of time this is quickly dealt with and the figures appear in a much better light. They may be a bit stumpy in thiestatures but this gives them a sort of ulp / Comic book style which is IMHO a real attraction of this set. The clothing is all okay, not 100% historically correct but the impression of 1930´s – 40´s gangsters, molls and Heavies is well represented.

The cars are Dinky / Matchbox and from my own collection aquired from fleamarkets / bootsales. Some of them are re-painted along the lines of the Henry Ford´s saying “You can have it any color you like, as long as it’s black.”

Set is available through our Ebay utility

Another of the newly released sets from RedBox. This one was released prior to last entry for the War of the Roses, and has been completely reviewed at PSR site, don’t miss it. My figures haven’t the same plastic colour than the ones in PSR site, so they must be a second series, and once againg they show some less flash than in PSR, although more that the Men at Arms and retinue set.

This time you get 36 figures in 12 poses, plus 3 shields in three equals sprue.
One of the problem with the sprue are some of the weapons, is hard to know where the sprue ends and the weapon begin :D, so take care of this.
Sculpture is quite good and shields have been decorated in relieve so a hand painted scheme is affordable.
Another problem are gain mould marks, which cross some faces by the middle. The hussite infantry has been covered previously for some other manufacturers, for comparission i took some pictures close to the MiniArt 72010 Hussites and the Orion 72019 Medieval Siege Troops which is not marked as Hussite but have a lot of hand gunners than can be used so. As you can see in the pictures the three sets are quite compatible, so a great variation can be achieved to cover the subject. Only one of the three sets, the MiniArt ones, comes with two hussite wagons, although recently Orion have released a set which haves some nice figures and one hussite wagon.
I also included two Zvezda figures to show they are all quite compatible again. Medieval range seem to be a lucky ones, we have four manufacturers here and all figures are compatible, this not ever happen. If i must choose one of the sets as the best, i can’t. All have odds and advantages. The MiniArt haves the two wagon, but at least my set, is plenty full of flash and mould problems, more than the RedBox ones. The Orion set have some very nice sculpted figures, but also tons of flahs, no wagon and not all the figures can be taken as Hussite infantry. So probably the best option is take the three. 😀
An excellent example of the MiniaArt figures can be found at mate Paul’s blog.

If you want to take this set now, take a look here. 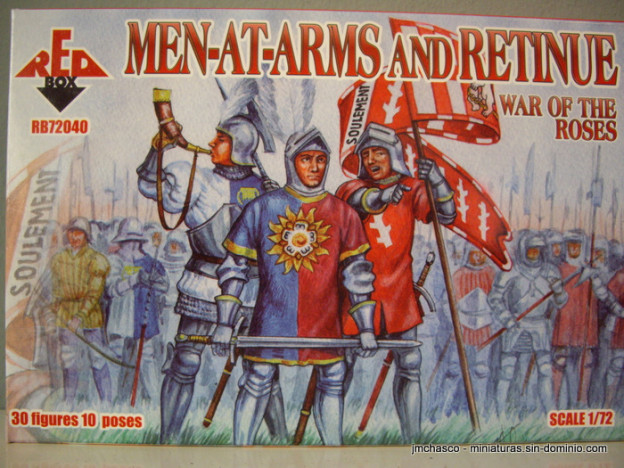 Is the first time i brought a RedBox set, after see the quality improvement they have done with their new medieval range,and i think they deserve this tiny review.
Set contains 30 figures in 10 poses, spread in 3 equals sprue. In fact quality of the sculpture is far away from previous RedBox’s set, so this one must be in any medieval army in 1/72 scale. All the poses looks pretty well, and the amount of flash in my set is less than the showed at PSR site (i’m lucky). They still have some mould problems, as many of the figures are crossed by mould marks, specially faces, what is an important odd in paint process. Mould marks are harder to remove than flash, you will probably disfigure all the faces if try it.
The standard bearer is probably the worst figure, not by the figure itself, but the standard is quite usefulness, and hard to remove from the sprue. Better will be thinking in replace it for a self made flag, which is not so hard. The flag is so thick than figure can’t stand up by itself 🙂 Although it can’t be appreciated in pictures another fault is the figure taking an arrow from the ground, the arrow is almost so thick as his arm.

I’m not an expert in medieval period but all the figures looks correct to me. They look what they are, medieval knight and men at arms, ready to fight. The several archer figures contribute to the sensation of they are British men.

Figures have a size totally compatible with the high quality Zvezda’s range, so if you have a medieval army composed with the Zvezda’s set, this can be a good addition. This one pass to the workbench, which is so huge at this moment than i’m not sure if they will be painted any time, as my medieval project is currently stopped.

Despite all the odds we are very happy to see the great quality improvement done by RedBox, we expect all the forthcoming releases will be in the same or greater quality, so we almost can say a “new brand” has born and we will be happy to purchase and work with their sets.

Don’t wait to get it, take a look here and choose the cheapest option.